Glitch is closing. Here's why.

Glitch, the beautiful massive multiplayer game with a pixel perfect design, announced that they'll be closing doors soon. It's sad to see so much work and love going nowhere. At least they were classy and wrote a candid and honest shutting-down post, and they're even refunding users. That's a level of integrity that you don't see everyday in the startup world.

If you've never played Glitch, it's now too late. The game world is only available for users already registered, and everything will shut down on December 9th 2012. Here's some videos to give you an idea of what you missed.

I was part of the first wave of beta testers. Even though I've never spent much time playing, I remember how every detail was well thought out, and carefully executed. The videos don't do justice to their attention to detail.

But, aside from the intrinsic beauty, the gameplay was dull. It was just a cute massive multiplayer social game. Maybe the cutest ever. But without any of the gamification tactics from other social gaming companies, there was no reason for you to keep coming back.

In a world of "Your crops are dying! Your friend Samantha just moved to a farm next door. Invite your friends to level up faster.", it's hard to keep users engaged these days.

This reminds me of the Steve Blank's MVP stories. Do you need to develop a full game, with so many levels, intricate dialogues, dozens of non-playable characters, only to realize that your users aren't coming back in the first place?

Can't you create a demo with a couple of levels and a handful of hard-coded NPCs, and invite your mom/sister/significant other to play? Check how many times they come back (when you're not looking). You'll achieve the same conclusions, with 10% of the effort.

Of course hindsight is a bitch -- or, like someone said on HN: "...hindsight is a Glitch" :). Sometimes you can't just hack an MVP together; you need a polished product. But that's not the case here.

Seems they put way too much effort on having a full product, but repeated some of the fatal mistakes others have done in the past. Lessons from Habitat outlines several of these insights, as seen by the creators of Lucasfilm in the mid 80's. The entire paper is a great read, but one part that strikes me as relevant to this discussion: 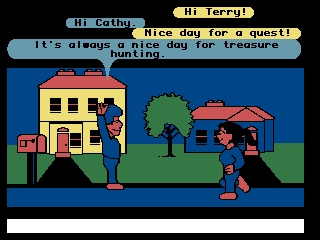 "While we find much of the work presently being done on elaborate interface technologies -- DataGloves, head-mounted displays, special-purpose rendering engines, and so on -- both exciting and promising, the almost mystical euphoria that currently seems to surround all this hardware is, in our opinion, both excessive and somewhat misplaced.

We can't help having a nagging sense that it's all a bit of a distraction from the really pressing issues.

At the core of our vision is the idea that cyberspace is necessarily a multiple-participant environment. It seems to us that the things that are important to the inhabitants of such an environment are the capabilities available to them, the characteristics of the other people they encounter there, and the ways these various participants can affect one another. Beyond a foundation set of communications capabilities, the details of the technology used to present this environment to its participants, while sexy and interesting, are of relatively peripheral concern."

Keep in mind the first Habitat was implemented in 1986, almost 30 years ago, and ran in 64 KBytes of a Commodore64.

We're now spoiled by Call Of Duty and hyper-realist NBA games. But there's a point to be made that the success of a MMO game is not defined by its level of peripheral sophistication (be it design, cuteness, or head-mounted displays), but by the social experience, and how people interact with each other. Minecraft, with its blocky graphics and limited interactivity, is a prime example.

Glitch isn't alone in repeating these mistakes. Worlds Chat did the same two decades ago, being the first 3D world ever created. It was later replaced by The Palace. Later Philip Rosedale had his chance with Second Life, which exploded, burst, and now is becoming cool again (and Philip is trying his hand again with High Fidelity).

Another issue with Glitch was channel distribution. It's challenging in 2012 to succeed with a web-only game, especially if you're not anchored on Facebook. And Glitch was built in Flash (!), so it missed billions of 2-3 minutes slots of free time that people have when waiting for the train, bathroom, elevator. And it almost never sent any emails, so I guess they were expecting people to bookmark the site and keep coming back. Yeah, right...

In the end of the day, the Glitch team deserve kudos for such a beautiful design. I just hope they can open source the code, so their work can inspire future designers and game developers.

You can continue the conversation on Hacker News.